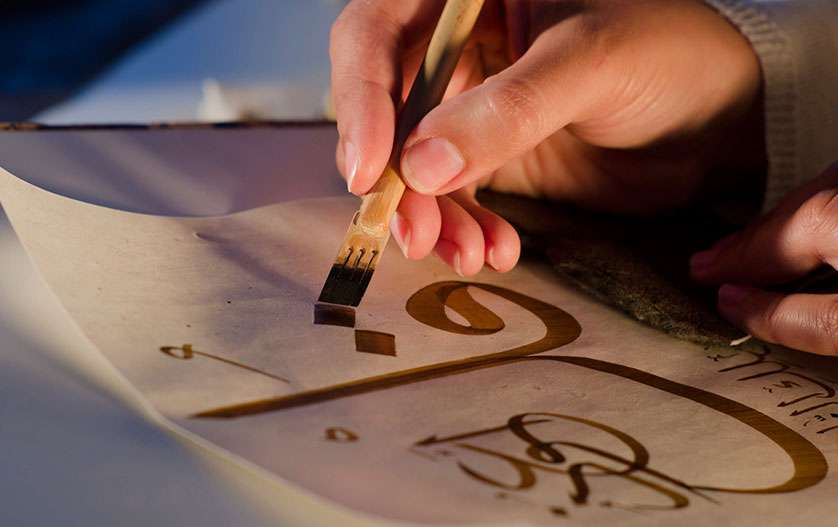 Islamic calligraphy, as a whole, is based entirely on the Arabic script, which includes 28 letters. One of the unique properties of the Arabic script is that it is written from right to left, unlike the majority of the world’s languages. Another notable thing about Arabic is that its letters change constantly based on their usage – they are written differently based on whether they are used at the beginning, middle, or end of a word.

One of the first scripts linked to the Quran is Kufic. This script’s histories can be traced many centuries back, and it was originally written on stone. The last traces of Kufic’s usage date back to the 13th century. This script is recognizable by the extra-long horizontal lines, and shorter vertical lines used to create the letters.

Around the 10th century, Muslim religious groups began to use the Maghribi script, which is believed to have been developed in Spain and North Africa. Some of the recognizable properties of the Maghribi script is the increased usage of sweeping loops and large bowls. Remnants of this script are preserved to this very day, and its style is being used in Algeria, Tunisia, and Morocco.

Other famous Arabic scripts are Thuluth and Naskh – both of them were developed and widely used during the Abbasid dynasty. The Thuluth script is characterized by a very clear structure that makes it one of the easier to read Arabic scripts, hence why it is still being used today. Some of Thuluth script’s characteristic features are the hooks found on descending letters, as well as the left-pointing slant of vertical strokes. Thuluth is often used in Quran books, and it is one of the most preferred scripts for Islamic decoration.

The Ta’liq script and the Nasta’liq script were developed rapidly during the Safavid dynasty – a time period in which Islamic calligraphy and art evolved a lot.